Alison and Brad are just too cute for their own good! No... I take that back. There's no such thing as TOO cute. Maybe they're right on the border. Anyway, they spent the afternoon, skipping, flirting and fighting!

We started out exploring downtown Portland, of course the Broadway Bridge was irresistible! We even found a spot that was used for filming Grimm - woo hoo! Then, naturally it started to rain, so we headed back to Brad's house for some tea, an outfit change and... PAINT FIGHTING!

Alison had seen a paint fight style engagement session online and thought that would be a great time... until Brad threw his first fistful of green paint... into her mouth. Ten minutes of toothbrushing later, they were friends again and ready for more paint throwing, hugging and wrastling! 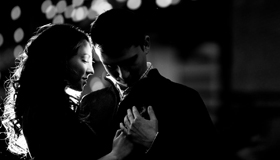 We started with red vino at my studio and then took a stroll down to the waterfront. The trees were blooming, birds were doing their bird stuff and we even had a gorgeous sunset! 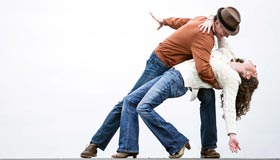 Luke is a dance instructor and Sheila is a happy woman with gorgeous curls so you can imagine how tough that made my job! Luke had her twirling, dipping and hoisted up in the air. 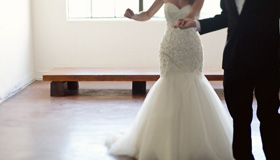 Erika and Marty dreamed of a gorgeous wedding worthy of publication. YU Contemporary was the perfect backdrop.

"Proposals are seriously the best! And I have a great track record. So far, all YESES! (Is that how you spell that? Yes's?) "

"Matt kept texting me about how anxious he was, and asking if all the p..."

"Ahhh! Yes, I love photographing proposals. Seriously. Its so exciting...."